No need to take notes—they'll be on the website [2]

Technology and the culture of
learning and teaching

Most of the points made in reporting back rightly drew attention to the extent to which the technologies contributed to the teacher- or occasionally to the student-centredness of the teaching. They explored how possession of more sophisticated means of presentation reinforced the authority and the control exercised by the teacher. But they also mentioned the technological infrastructure implied by each resource, and hence the formality of the setting in which they were used. Even chalk requires something to write on, present in the room. Since it is not a normal item of furniture, the practical technology of teaching— the black- or chalk-board —leads to the social technology of the classroom.

Ensuring visibility for the students in such a room leads to an arrangement such as that on the left, in which communication between pupils is inhibited in the interests of being able to see — and be seen by — the teacher. His (or her) authority is reinforced, and correspondingly that of the learners is diminished. Because the teacher has to face the board when using it, the capacity to ensure control even when not directly facing the class is at a premium.

On using this kitThe overhead or data projector tends to reinforce this pattern: it requires the more sophisticated infrastructure of electric power (although I imagine there are portable versions somewhere). While the images and text on the board are written on the spot — taking up a lot of teaching time — slides are prepared in advance, and can serve to exercise control by being delivered at a fast pace such that students have no time to do anything other than take notes. The teacher can see the students all the time, too. 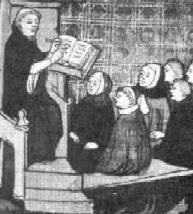 But this is not merely about the teacher transmitting knowledge: it is also about ownershipof it. In the scene on the right, mediaeval students are being instructed by a monk or priest. He has the only book. It is quite possible that he is the only one who can read, in any case. The teacher is identified with the knowledge and is the source of it — hence the respect in which teachers are held in such a setting. It is not that teaching itself is so respect-worthy, as the assumption that only someone who embodies the knowledge or wisdom in himself can teach. I say "himself" but this may go a fortiori for "women's wisdom", which tends not to be written anyway, because the men have control of the technology.

If the students do write, they will do so mainly on slates or perhaps wax tablets. Like the chalk image on the board, their inscriptions are temporary and hence — in this context — have no authority.

Under such circumstances, if you are to know something, you have to "learn it by heart". Knowing where to find it in a book or a library does not count for anything unless books and libraries are commonplace. Learning, therefore, means memorising.

The Subject and Teacher are separated out: the teacher may simply be the interpreter of the Subject: see the STL modelPrinting makes books cheaper and standardises them: if everyone in the class has the same book, it really does say the same thing. The text-book makes the source of the teacher's authority transparent. It is no longer personal wisdom, but standard received knowledge which is theoretically available to everyone who is inclined to study it.

(Such technological change, of course, tends to be accompanied by the social development of compulsory schooling, and standardised assessment: the two reinforce each other. Cf. HUNTER I (1994) Rethinking the School: subjectivity, bureaucracy, criticism St Leonard's, Australia; Allen and Unwin)

The introduction of cheap local printing facilities restores some of the teacher's power over content—the handout has arrived. Hectographic systems (the spirit duplicator) were well-suited to the preparation of diagrammatic drawn handouts, in several colours if required. Stencil duplicators provided cheap text-based handouts. Lithography produced high-quality long runs — and then the photocopier, and the PC with a laser printer, superseded all of them.

In practical terms, students came to have higher and higher expectations of what they would be given in class. Copying from the board is no longer necessary, and even note-taking from verbal presentations diminishes in importance. Where it does happen, it can be structured through gapped handouts. Students may no longer expect to rely on the text-book, when they receive precisely-targeted handouts from the lecturer.

To a certain extent, the teacher's position is restored. But the handout tends to be used less for the individual teacher's distinctive angle on the material, as to pare (or even dumb) down the material simply to what you need to know for the purposes of this particular course.

After all, what is being done with the time which is being saved? Students no longer have to copy from the board, or even take notes. Theoretically there is more time for exercises, examples and discussion: but unfortunately the trend is to cut costs by cutting class contact, so the opportunities for interaction and sharing understandings are lost.

But a word is in order about the humble flip-chart. This is the device for getting feedback. It is simple, spontaneous, and surprisingly permanent: it is not surprising that it remains a feature of many business training environments. There is not only a need for the transmission of knowledge as indicated by the OHP or the data projector, but also for a technology to facilitate discussion and assimilation and practice. That is the function addressed by the flip-chart.

Each of the technologies we have considered has not only been suited to slightly different function in teaching and learning — it has slightly changed its nature, particularly in the balance of authority around the teacher and the subject-matter.

To reference this page copy and paste the text below:

This work is licensed under a Creative Commons Attribution-Noncommercial-No Derivative Works 3.0 Unported License.

This site is independent and self-funded. The site does not accept advertising or sponsorship (apart from what I am lumbered with on the reports from the site Search facility above), and invitations/proposals/demands will be ignored, as will SEO spam. I am not responsible for the content of any external links; any endorsement is on the basis only of my quixotic judgement. Suggestions for new pages and corrections of errors or reasonable disagreements are of course always welcome.