Competence, Proficiency and Beyond

Most teaching is concerned with bringing people up to a level of "competence" in their discipline, although the meaning of even that term is contestable.

But what does it mean to go beyond "competence"? It is clear that some people achieve expertise, but how do we recognise it, and - even more problematic - can we teach it, and if so, how?

What is the nature of the confidence which allows a surgeon to operate, never entirely sure what he will find when he gets in there, but clear that he cannot close up until he has sorted it out? What is the expertise which distinguishes a premier division footballer from the amateur who plays in the park, and whose idea of tactics is simply to chase the ball wherever it is? How does the skilled counsellor form just the right question, in just the right tone, at just the right time, to enable a client to see her situation differently? How is the counsellor able to take informed risks? How is that different from the well-meaning novice who is likely to miss the opportunity or unwittingly nudge her in an unproductive direction? And how...? The list is endless.

Apart from being experienced and practised, is it possible to generalise about the nature of this advanced learning?

Dreyfus and Dreyfus (1986), drawing on their different perspectives as computer scientist and philosopher, developed a useful five-stage typology of developing expertise, with the characteristics of each stage:

This model has been extremely influential, particularly in the field of nursing, as applied by Benner (1984) (yesher work does pre-date the Dreyfus' publication, but was nevertheless based on it). It is sympathetically evaluated by Eraut (1994). Still, it begs several questions.

Who defines the Expert?

The problem about not covering oneself in modesty is that it may be revealed that one "has a great deal to be modest about" (as Churchill said of Attlee).Throwing modesty aside for a couple of sentences, there is evidence that some people think I am an "expert" teacher - I am a university Teacher Fellow and (since the first version of this page, a National Teaching Fellow). On the other hand, if you read my students' evaluations of my teaching, some of them do not necessarily agree. Who is right? Both, and neither, of course. The label is not enough, and different stakeholders are entitled to come to different conclusions.

One serious problem with the Dreyfus definition is that you cannot read back from it to identify an expert. It is possible to imagine (or even to know) people who might meet the criteria for stage five, but who are still consistently wrong or incompetent: their "Intuitive grasp of situations based on deep tacit understanding" is just no good. There are no doubt many expert practitioners of astrology (or psychoanalysis, perhaps?), who would be recognised as such by their peers (and probably even by their clients), but are nonetheless perpetrators of arrant nonsense. See Gardner (2010) and particularly the work of Tetlock here. This link is to an introductory interview with Tetlock by Jona Lehrer of Wired.

That is just a little unfair: if their clients keep going back for more, and perhaps recommend their services, they are clearly good at something - but it does not necessarily accord with the theoretical framework which they espouse.

One important thrust of artificial intelligence research is to perfect "expert systems", which are typically programs which solve particular problems with the accuracy of an expert by gathering information through questions asked of the user, and applying sophisticated algorithms and statistical weightings to the evidence gathered. They particularly aspire to endowing the Novice or Advanced Beginner with the sophisticated diagnostic skills of the expert.

However, there are two major problems with the expert system idea.

Reflection and its limits

This raises another question. The most embraced model of professional expertise is that based on Donald Schön's (1983) idea of "reflective practice". As the linked page suggests, this emphasises thinking about what you are doing in order to learn from the experience. But another linked page discusses how the mastery of a skill can be said to come when it is "second nature" in other words, it is effectively unconscious. This is consistent with Dreyfus and Dreyfus' final stage.

A paper discussing these doubts is here.I have doubts about the virtues of reflection per se. Reflection is just as likely to produce unrealistic and untested delusions of expertise (or hopeless self-condemnation, or self-justification, or blame, or...) as it is to produce positive learning and development. It may be a necessary condition of expertise, but it is self-evidently far from sufficient; and as a necessary condition, it may well be an epiphenomenona spin-off, rather than a cause. Although much education for professional practice emphasises reflection nowadays, it may well be mistaking style for substance.

The Components of Expertise

So-if we can't use reflection as a defining characteristic, and the Dreyfus model does not pay enough attention to competence, how about this? Note that this is not intended to replace Dreyfus. It is consistent with their model but provides a slightly different perspective: it concentrates on exploring the components of expertise, rather than the stages on the way to it. It does work in some measure for that purpose, but of course as a graphic model it is less detailed. 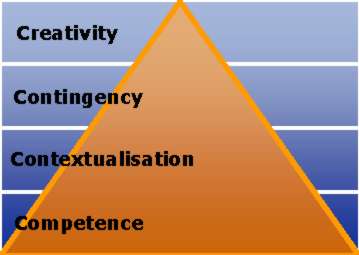 The model takes the familiar form of a pyramid, in which each successive level presupposes those below and requires them as a foundation. Creativity without competence is the prerogative of the child and the charlatan: it is submitted that the expert works at all four levels.

I have not labelled the pyramid itself, but the background instead: the pyramid may be the map of an individual's achievement, while the background represents the field of expertise. The horizontal bars are arbitrary dividers, but the graduated background is intentional. It represents something like "accessibility to consciousness": for the expert, competence in performing the individual component parts of his craft or profession is taken for granted, and as discussed above, may no longer be explicable or articulate. It is second nature: but the higher reaches have to be thought about. It is of course precisely freedom from the need to think consciously about the lower levels which frees practitioners to concentrate on the higher ones.

"Skill" here embraces knowledge: either its direct possession and accessibility, or knowing where to find it. 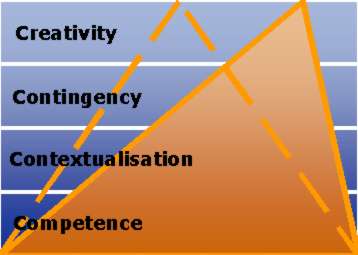 The percentages, of course, are purely suggestive: an informal model like this is not amenable to empirical testing. Similarly there is no definitive shape for the triangle: you might like to think of its proportions in your own area of practice.The diagram above represents the situation of a practitioner whose expertise lies in a slightly different area from the first: competence is about 90% the same as the first, the areas in which she contextualises about 66%, the contingency area overlaps by less than 40%, and there is no overlap in creativity.

The element which is growing in importance as one goes up the pyramid is the strategic component. Competence does not require it: contextualisation is a prerequisite for it, and it makes a tentative showing: contingency planning presupposes it: and creativity is mainly the strategic deployment of the lower levels.

So what is "strategy"? "Anticipation" here does not mean "worrying about", but "taking into account in advance"I am sure that the management gurus have a range of definitions, but for present purposes it is a game-plan. It involves the anticipation of possibilities and the development of plans to deal with them. Someone defined it as "What you do when you don't know what to do", as opposed to tactics, which are "What you do when you do know what to do". [I've given up trying to trace the source of the aphorisms.]

You protestbut this is just game-playing! So it is. I have avoided the chess analogy so far, but it is apposite. When that consummately expert politician, Harold Macmillan, was asked about the greatest problem in politics, he allegedly replied, "Events, dear boy, events." He was being a little disingenuous: he had the kind of overview of the political situation which made it possible to read it as a game, inferring the covert rules from the overt behaviour, and he was able to "play" it thus (until Profumo). From Huizinga, to von Neumann and Morgenstern, to Eric Berne, it has been clear that game-playing is a serious business and also a way of modelling the real world.

The real expert does not treat his or her practice "like a game", but does recognise the ludic (game-playing) elements within it. There is no moral dimension to this, merely a systemic one. It is the ludic quality which characterises the true expert. (No, an alternative adjective is not "ludicrous"!)

Can expertise be taught?

I suspect not. This is partly a matter of semantics: the developing expert has by definition become a self-teacher before attaining full expertise. Reflection, I have argued, is a necessary if not sufficientbut perhaps epiphenomenalcondition of expertise. The relative importance of learning from experience becomes greater the more expert you become, and so although you might be inspired by a greater expert and learn from her, nevertheless she does not "teach" in the conventional sense.

But thenit all depends what you mean by "teaching"...

And we return to the question of who defines the expert. Most of the people I have known who arein my viewexperts would not describe themselves as such (except in some very narrow fields). Indeed, describing oneself as an expert may be as self-defeating as the cry of the dodgy salesman, "You can trust me!" Experts are perhaps more willing to admit their need to learn than lesser practitioners.

So-it's an open and debatable question and this page is already too long.

DREYFUS H L and DREYFUS S E (1986) Mind over Machine: the power of human intuition and expertise in the era of the computer Oxford; Basil Blackwell [Back]

SCHÖN D A (1983) The Reflective Practitioner: how professionals think in action London: Temple Smith [Back]

See also David Perkins' excellent keynote touching on some aspects of this issue from the Third Biennial Threshold Concepts Symposium in Sydney 2010 (video): the most relevant section starts about 35 minutes in.

Thanks to Bruno Setola for his discussion of this paper and for putting me on to the Perkins video; his thoughts are here.

Atul Gawande discusses progression from competence to excellence at both individual and institutional levels, in this excellent lecture to Harvard Graduate School of Education (24 October 2012) on the importance of feedback and continuing coaching. The whole thing is about 80 minutes but worth the time.

To reference this page copy and paste the text below:

This work is licensed under a Creative Commons Attribution-Noncommercial-No Derivative Works 3.0 Unported License.

This site is independent and self-funded. The site does not accept advertising or sponsorship (apart from what I am lumbered with on the reports from the site Search facility above), and invitations/proposals/demands will be ignored, as will SEO spam. I am not responsible for the content of any external links; any endorsement is on the basis only of my quixotic judgement. Suggestions for new pages and corrections of errors or reasonable disagreements are of course always welcome.